How backup with iodéOS recovery

Since I don’t use TWRP because of encryption errors, how you backup your phone apps, settings, etc. (not personal stuffs like images, videos…)? In case that update will bootloop or something else fail. Manual reinstall from scratch is time consuming. Thanks.

For backup you can use the SeedVault application integrated in iodéOS. Here you can save the data to the internal memory of the device, to the cloud (Nextcloud), but better to microSD card or OTG USB stick.

Unfortunately there is quite a lot of apps that cannot be backup this way. For example apps like bitwarden, excel, joplin, mull, nine, onedrive, telegram, schildichat (element), spotify, word…

Also system setting is not in backup, right?

If your phone is rooted, you can use Migrate or Neo-Backup to save your phone.
Both do the job.
If non rooted, neobackup will only save APK but not data.

If your phone is rooted, you can use Migrate or Neo-Backup to save your phone.
Both do the job.

no sorry. you can’t
iodéOS is compiled in usermode and not userdebugmode.
to use these scripts it is neccessary to enable at least “Rooted debugging” in Developer options (or a rooted device with SuperSU oder Magisk) which is not possible in usermode. 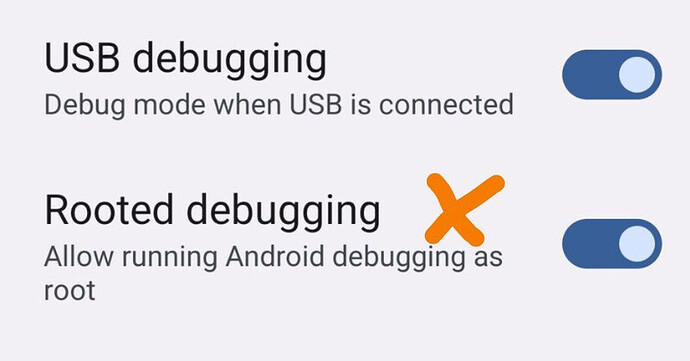 but i am alrady in contact with @vince31fr since a few days, regarding this topic and scripts

no sorry. you can’t
iodéOS is compiled in usermode and not userdebugmode.
t

If your phone is rooted, you can use …

Will those scripts not work even with a rooted phone?

ah ok sorry not registered that you are already referring to a rooted phone.

the phone does not necessarily have to be rooted for the scripts to run. it is enough if the LOS is built in userdebug mode, that you can activate the “rooted debugging” option. that’s enough.

I have also tested a lot in the direction of backup and these scripts are imho the best and easiest way to back up ALL apps.

As I said, it’s @vince31fr turn, let’s wait for feedback from him…

This is something we can think about, but we are reluctant to produce userdebug builds: increased attack surface, and we suspect that some apps can detect userdebug builds even when hidden by setting the appropriate system properties. Maybe some other solution could be found, let us think a bit about that (not a priority though).

So what is your advice for users wanting to backup their installed apps and user data?

there is no decent alternative solution.
the only feasible thing is seedvault and manual rework.
but in the end there are apps that can neither be backed up via seedvault nor offer the possibility to save their config manually. and it therefore remains quite time-consuming and complicated.

this topic is discussed again and again in many other community channels.
no matter whether ROM or GSI scene.
and in the end there is no proper solution.
AndDiSa’s approach with its scripts is (so far) the only solution that is implemented and recommended when compiling in userdebug mode…

For users that are able to flash custom ROMs… Of course complete backup is frequented topic. Without complete backup, if anything goes wrong with update, basically I need to start from zero. Which is time consuming.