Where Does "Blocker" Data Go? More Information on "Blocker"

From what I am seeing iodeOS is very powerful and unique from any ROM I have seen to this day. What makes it so unique is the built in DNS filtering that is typically done by apps like TrackerControl while they use the built in VPN functionality of Android. On the iodeOS website we read the FOLLOWING as an introduction to the OS:

"3. To provide a new and powerful way of blocking ads, malwares, data leaks of all kinds to many intrusive servers. We are developing an analyzer, tightly integrated into the system, that captures all DNS requests and network traffic, as well as a user interface (the iodé app). Compared to some other well-known adblockers, this has the advantages of:

My questions in regard to this are the following:

The document states, “an analyzer, tightly integrated into the system, that captures all DNS requests and network traffic, as well as a user interface (the iodé app).”

-Since the “analyzer” captures all DNS requests where is this information stored?

-Does any information the “analyzer” captures ever leave the phone?

-Regarding the said information captured by the “analyzer” who, other than someone with physical access to log into and decrypt the phone, has access to view or read this information?

-Is the information captured by the “analyzer” encrypted in the partition it resides in?

-Is the “analyzer” open source? If not, why not? And will it be made open source in the future? If so do you have an approximate timeline of when the source code will be made available?

-What are the “blocklists” or “filter lists” being utilized and where can someone view them?

Thank you for this information.

Much answered here. This OS is impressive! 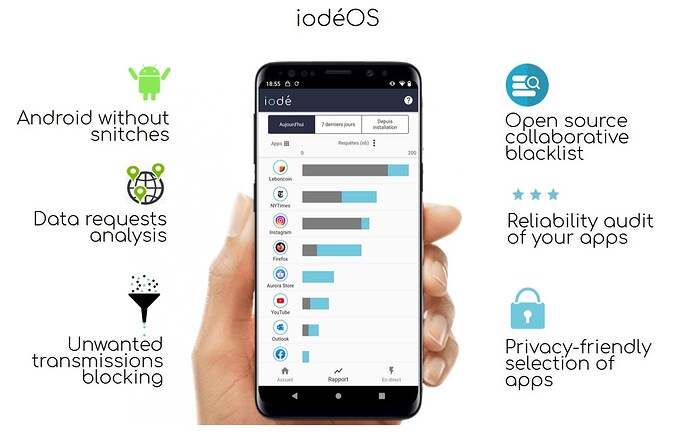 We took a close look at iodéOS, which is based on LineageOS. Can the privacy friendly operating system fulfill its promises? Read our test!