On my FP3, when I try to see what was blocked by iodé from the app, I get a correct display on the home screen for the 3 time ranges, but when I try to look at the report tab I can only see the data from today.

Clicking on “7 days” or “Since installation” buttons do not update the content of the report, as you can see in the attached screenshots 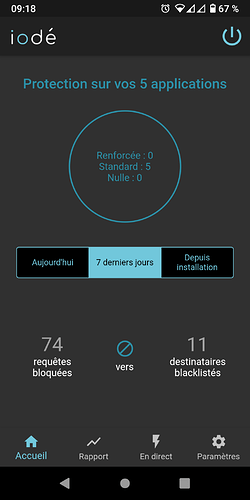 Tried to reboot device and shut/unshut iodé but to no avail. Granted it’s kinda minor, but I’d like to se what was blocked as expected

Keep up on the good work anyway ! 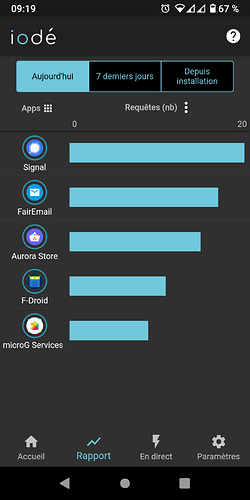 Last 7 days report which does not show the 11 blocked destinations and is the same view than today’s report : 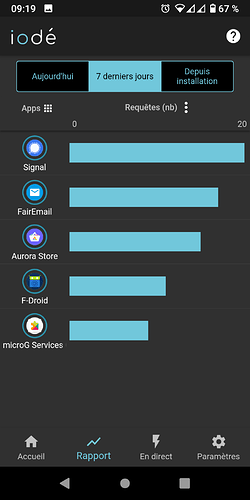 For how long are you using iodé ?

I also just noticed that in the “parameter” screen, only the app I used today are displayed. I guess that’s related.

That’s strange… My only hypothesis would be a corruption in the saved data, although if you don’t reboot your phone for a few days, statistics should appear in all tabs…
What you could do anyway is to clear all data of the blocker, with adb:

You can also remove /data/snort in twrp if you installed it instead of lineage recovery.

I bought my phone directly from iodé, so no twrp nor adb at hand right now, and was kinda hoping I would not need to tinker with it…

I’ll see if I bother to install adb in the next few days and keep you updated. I hope I’m one of few with this issue though.

Also, as a side note, having the ability to purge snort data directly from the iodé app might be a good idea for future features

Could you tell which firmware version do you have exactly, in “About phone” ?

Note : I updated iodé yesterday, but the bug was prior to the update, which did not resolve it as I hoped, hence the topic

Ok, this is a strange bug and I don’t see at all at first sight, thinking at the internals of the blocker, how it could happen…
So I suggest you one or several of the following options: