After 2.4 update (I’m now on 2.5 ver) I noticed massive battery drain in stand by (screen off). Curve of battery drain is linear down, no matter if screen is on or off. I even changed new battery, but it wont help. Anyone has similar issue?

Following your message, I freshly set up two A520F, one with iodeOS 2.5, the other with iodeOS 2.6 (beta), both in the iodeOS default configuration; Wi-Fi off, battery status 90% each (Smart Charging), screen dark.

After one hour, I couldn’t determine a serious power consumption [88% to 90%] on both devices, although both batteries were already intensively stressed. The 2% difference can also result from the different battery’s general condition.

79% after 5 hours of standby without additional apps means around 24 hours in standby. That is not good battery life for fresh OS at all=( This is similar performance I have now with new battery. But before 2.4 update I was able to charge my phone once i 2 days and almost never get under 15%.

I’ll try fresh install on my device. I’m not sure why there is same battery consumption with screen off - this doesn’t make sense.

Is this normal curve for battery drain? It doesn’t matter if screen is on or off. 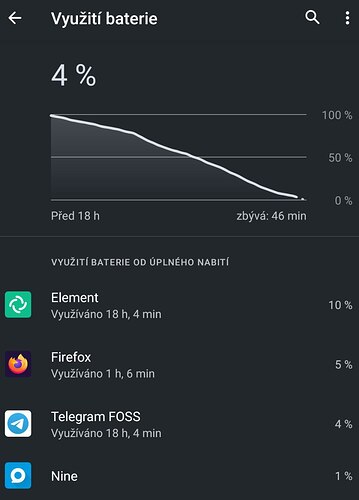 You may have a greedy application that does not appear on the battery report, constantly awakening the device. It may also depend on the quality of the signal (wifi, mobile data). You can get more information with apps like BetterBatteryStats or GSam (they are a bit outdated, maybe better ones exist).