You follow the iodéOS installation instructions. Okay, but I can’t read there anything about fastboot flashing unlock_critical

The installation guide of another Custom ROM vendor says:

Noticeable here is the position 8. Reboot again into bootloader. Did you execute this intermediate step?

In my experience, the error message does not say that the boot loader is corrupted, but only that the fastboot command is not allowed.

I got this message when either the fastboot version did not know the command or when the device did not have a partition named unlock_critical.

If you turn off the device and turn it on again - what happens?

First of all thanks for the reply. When I turn on the phone it goes back to fastboot mode

Yes, I followed all the instructions you provided before flashing the phone

If you turn off the device and turn it on again - what happens?

Following the official fairphone forum I also tried this command

the output obtained is

You get 0, that means you have to open a RMA Ticket at Fairphone and have to send it to Cordon to unlock it again

Did you issue this command before relocking ? When it returns 0, bootloader must not be relocked.

Hello everyone, I am returning to this topic because I received from fairphone service my repaired phone. Before I re-lock the bootloader I would like to make sure I don’t do any new damage so I am sharing here the procedure hoping to get confirmation that it is the correct one:

and I got this output

If I understand correctly now I will be able to re-lock the bootloader safely?

have you unlocked the critical partions, as described in the FP manual?
If yes, lock them
fastboot flashing lock_critical
Do it anyway, even if you get the error or not.

And then do a fastboot flashing get_unlock_ability again.
What happens?

so my error is to unlock critical bootloader?

So you did what you written in your post before?

Before locking the bootloader again, I had second thoughts and restored the stock firmware from fairphone.

Does this mean that once criticals are unlocked, it is no longer possible to reinstall the stock rom and locked the bootloader again?

You are in a bootloop, right?

What info gives unlock_availability? 0 or 1

I got the repair quote from Cordon and it’s € 649, practically a new fairphone. It is absurd since the repair was done even for 30 €. I contacted fairphone support but if the quote doesn’t change I’ll have to say goodbye to fairphone

Fuck that are no good news

Fairphone support replied to me and said that they cannot influence the price. The only alternative is to pay €18 to get the phone back. This is totally absurd and I don’t know what to do

Fairphone’s support refused to repair the phone at the previous prices and I was forced to request the return of the phone without repair.

End of my love for fairphone

Yesterday while I was at work I was contacted by Fairphone support, they apologised for everything and my device will be repaired. For me the matter is resolved

If you want to install iode again do it that way: 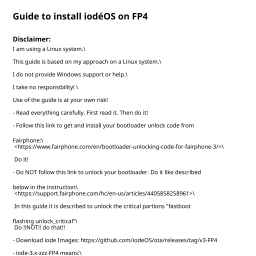 Thank you very much!

Now I’m a bit shocked and I think I’ll keep stock FOM for a while. I’d just like to understand, at least conceptually, what’s so important about the ‘critical’ partition and why for some OSes like /e/OS it needs to be unlocked and why for others (like iodé) it doesn’t.

Basically: if I installed /e/ tomorrow and then wanted to switch to iodé, how would I do it? Would I risk a new phone brick?